Alright a promise is a promise. You wanted recipes and don’t have em, BUT, I do make some pretty tasty food every now and again and although i might not have every tiny measurement (i don’t really measure ingredients) here my thought process through cooking.

My wifes vegan, so I have a natural reflex to keep vegan alternative ingredients in mind and

I’ve listed them here also so you’re all good!

PLEASE read the WHOLE thing first, as I might randomly start talking about adding an ingredient waaay later and you’ll be like ‘what the hell?’

theres bound to be spelling mistakes too, so sorry about that.

Aight so here we go, thai red curry with a skewer of char siu chicken because I’m greedy like that.

I like to think that every country has their ‘Star player’ ingredients, thai food would be: garlic, lime, lemongrass, ginger, chilli, basil & coriander (or cilantro for you u.s folk). you can literally throw these ingredients on anything anything and it’d give it a thai feel.

If you’re not that kitchen savvy, I strongly suggest you just buy thai red curry paste from the shop, it tastes pretty damn good, and when you throw that with coconut milk you’re good to go. But if you wanna get all fancy for no reason like i did, you’re gonna need:

1 tsp. shrimp paste, or for the vegans 1 Tbsp of Thai golden mountain sauce

depending on how spicy you want it

once you have all that, bung it in the blender and button smash the crap out of it until it forms a solid paste. It wont be super super red, but it will while cooking the curry

so yeah, ALL that, or just get a pack of red thai curry sauce lol.

Next you’ll need some chopped chicken breast, or for the veggie vegan crew, some tofu or/and  broccoli, sweet potato (half boiled, chick peas, or anything else that you’re feeling)

For the rice I strongly suggest sticky jasmine rice, as thats the equivalent of pure crack in the rice world, but any rice is all good. I’m not gonna go into cooking the damn rice, just have it ready near the end of the curry. you can do it, i believe in you.

get your chicken (or veg), and add fresh crushed garlic, garlic powder,  salt, pepper, ground basil, a  lil bit of ginger powder, and half a freshly squeezed lime, mix that about and leave it for about 5 mins (the longer you leave it the better)

get a frying pan on, throw some oil in, (olive preferably) and then add the chicken. infrequently stir it, like every 2 mins, just to ensure its cooking evenly till it looks golden brown, probably around the 10 min mark. the chicken probably aint cooked fully yet so don’t take a bite and die yeah?

add the red curry paste and let that bad boy sizzle, in the pan. Awaken your inner ninja and start randomly stirring it all about until the paste covers the chicken. next add that remaining coconut milk so you’ve got a real nice curry sauce vibing in your pan.

after 10 mins add some freshly chopped basil, plate it up with the rice and garnish with that awesome rice. BOOM game done.

The chicken char siu skewer was totally unnecessary and i was absolutely STUFFED without it, but if you wanna make it as a starter or something, simply season chopped chicken breast, or tofu (vegan alert) with:

mix all that in and leave it for an hour at LEAST but over night will be better, then throw some sticky char siu in the mix. you don’t have to, but I’m a bit over the top like that.

grab your skewer, and pierce the chicken pieces onto the skewer. if you’re using tofu, make sure you go SLOOOWLY man, you don’t want it breaking off and all that. throw that in an oven on a wire rack on 180 degrees for about… er i dunno, 20 mins? 25 maybe? and there you bloody have it!

lemmie know what think in the comments, and if you tried it out! Till next time… 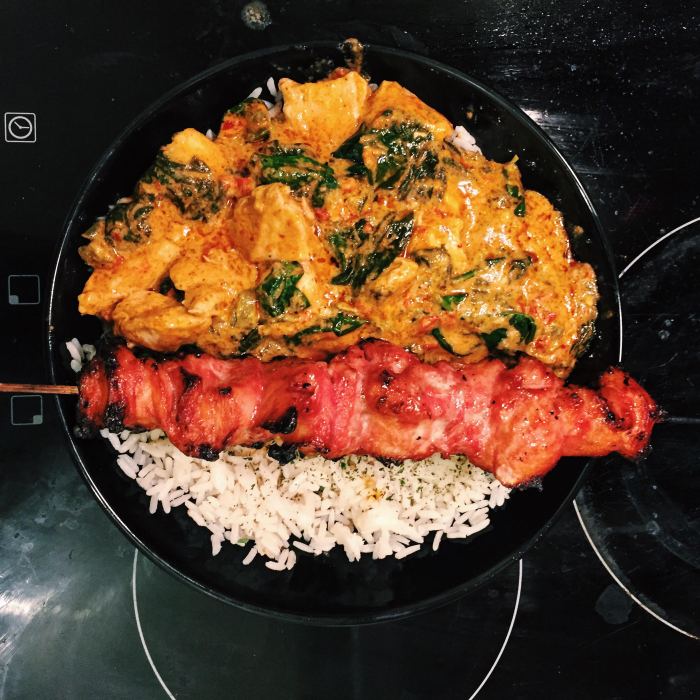